Throughout the many months of COVID-19 lockdowns and restrictions there have been a number of Chichester’s residents who have faced incredible hardships, but who have received vital support thanks to a hugely positive initiative inspired by Chichester’s Mayor, Councillor Richard Plowman’s, response to the situation.  The Mayor’s Hardship Fund was developed in May 2020, and since then has gone on to provide over £11,000 worth of support to those in greatest need.

The Fund, which is now coming to a close as restrictions lift and traditional services return to care for those facing hardships, supported 58 individuals and organisations throughout the last twelve months.  This was possible through the collaboration and partnership between Chichester City Council, Chichester Welfare Trusts and the Chichester Community Development Trust.

Cllr Richard Plowman spoke of the success of the programme saying, “Following discussions with the newly formed Chichester Community Network, I was painfully aware

of the plight of many people within the city, and how the pandemic’s restrictions on support and services was going to exacerbate this for many, along with job losses and financial hardships.  Myself and my colleagues were keen to provide an immediate and practical response, and to ensure that those in greatest need could receive practical help without extensive bureaucracy causing delays.  The incredibly positive collaboration between The City Council, Welfare Trusts and Chichester Community Development Trust was a very powerful, productive and positive force. We are delighted with the outcome of this project.”

In addition to the direct support received by many, referrals were also made to the Chichester Welfare Trusts for those needing ongoing support.  Practical tasks undertaken by the Mayor’s Hardship Fund team included supporting individuals with food shopping, replacing broken white goods, replacing broken ovens and other cooking equipment and supporting individuals with travel, amongst other tasks.

Ruth Taunt, the Welfare Officer for the Trusts, has said, “It has been a privilege to speak with many individuals who, despite their own difficulties, have retained a warmth, generosity of spirit, and sense of humour.  In many instances they have continued to give to their own communities regardless of the very real hardships and uncertainties they have themselves experienced.  Moreover the thanks and feedback we have received has been most moving, and in turn we would like to pass on our thanks to all of those who have been involved in this Fund – in donating money, supporting the distribution of goods and referring individuals in need of support.”

A slice of socially distanced heaven!

Building the future with Pope Stevens

Autumn update on the Community Garden 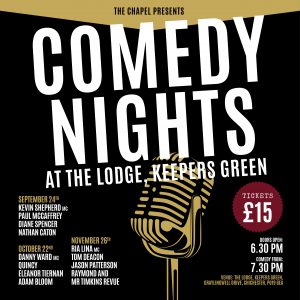 We are so excited to launch our new monthly comedy night which will move to it’s home at Graylingwell Chapel in 2022. Each month we will bring you some of the finest comedians in the[...]
View Calendar
This website uses cookies to improve your experience. We'll assume you're ok with this, but you can opt-out if you wish.Accept Reject Read More
Show more

This website uses cookies to improve your experience while you navigate through the website. Out of these, the cookies that are categorized as necessary are stored on your browser as they are essential for the working of basic functionalities of the website. We also use third-party cookies that help us analyze and understand how you use this website. These cookies will be stored in your browser only with your consent. You also have the option to opt-out of these cookies. But opting out of some of these cookies may affect your browsing experience.
Necessary Always Enabled
Necessary cookies are absolutely essential for the website to function properly. This category only includes cookies that ensures basic functionalities and security features of the website. These cookies do not store any personal information.
Non-necessary
Any cookies that may not be particularly necessary for the website to function and is used specifically to collect user personal data via analytics, ads, other embedded contents are termed as non-necessary cookies. It is mandatory to procure user consent prior to running these cookies on your website.
SAVE & ACCEPT
×
×